The PNAHA Washington State Female Development Camp is considered to be an ‘Open Camp’ by USA Hockey, which means you won't receive a personal invite and you are responsible for making your own arrangements for travel and accommodations.

Please save the dates of January 11 &12, 2020 for the 2020 PNAHA USA Hockey Washington State Development Camp.

The goal of the Girls’ Development camp is to select players to advance to the Multi-District Development Camp in 2020.

Final schedule and hotel details will be posted on the PNAHA website as soon as they become available.

We look forward to seeing you in January. If you have any questions, please do not hesitate to contact me. 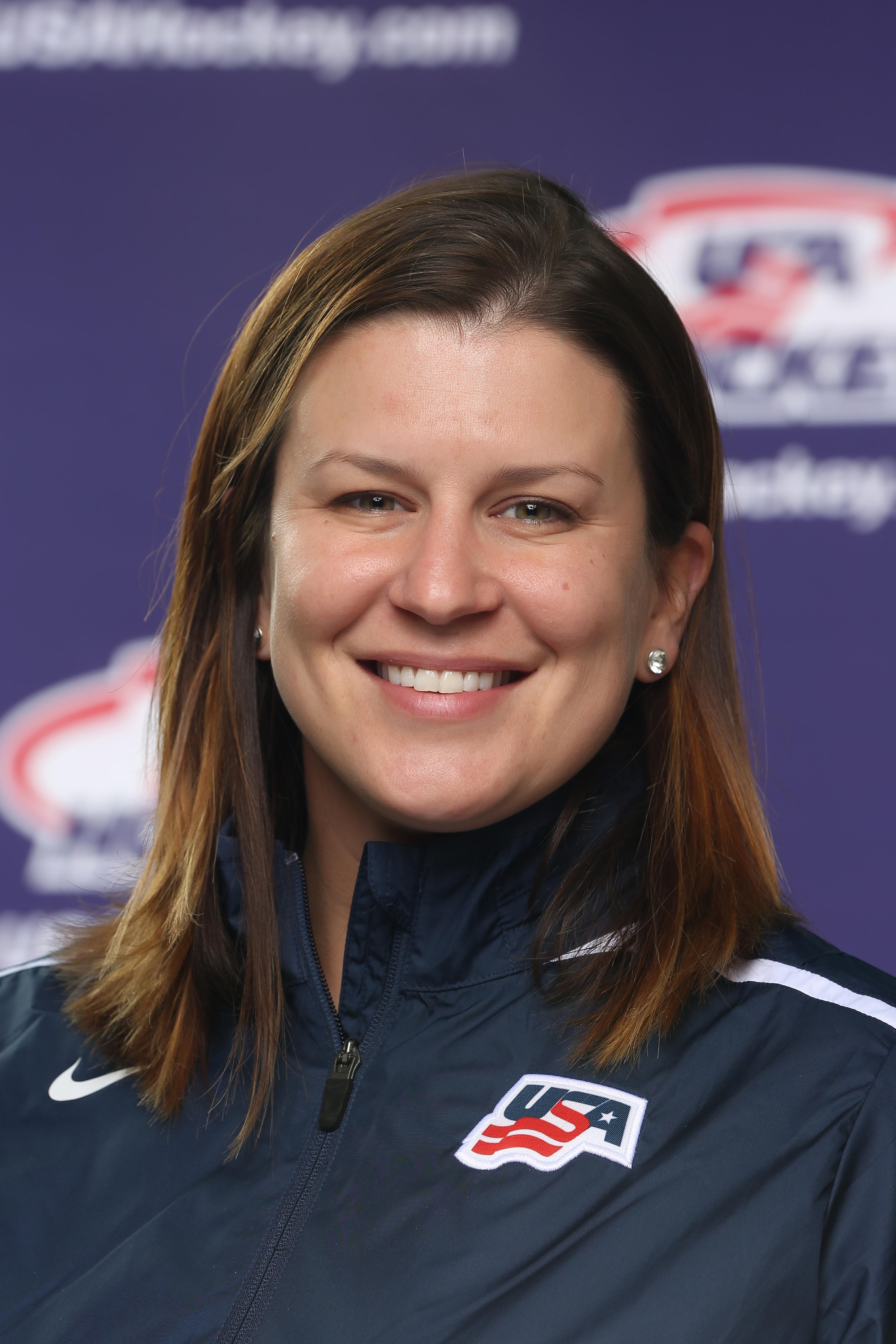 Katie Holmgren has served as the Director of Program Services since November 2018. She oversees the program services team, which works with local associations to provide volunteer support, help coordinate existing growth programs, resources via Club Excellence, educational opportunities and initiatives to develop youth hockey participation. She also serves as the liaison for the Pacific, Northern Plains, Central and Michigan districts.

Holmgren was hired in September 2010 as the first ever Coordinator of Adult Women’s Hockey and was promoted in December of 2014 to Manager of Adult Hockey. Under the adult department, Holmgren has served as the General Manager for U.S. Women's National University Teams since 2011.

Holmgren is a native of New Hope, Minnesota and studied Sport Management at Iowa State University, where she played 4 years of ACHA hockey, serving as the team’s captain for 2 years. Before joining USA Hockey, Katie spent time working in professional baseball and hockey. She is a level 4 coach who coaches both youth and high school hockey in Colorado Springs.

Davidson was named a coach in 2012 when she served on the board of directors for the team. She also was a former national team player and because of that, it transitioned her into coaching.

Shawna currently resides in Duluth, Minnesota.  She played both forward and Defense for the University of New Hampshire.  She also played for Team USA.

Morgan Stacey is in her first season as the assistant coach at Aurora University. She has coached with USA hockey at the district, multi-district, and national camp levels and has coached for several AAA youth organizations. Morgan played Division 1 college hockey at Mercyhurst University. As a three time team captain, she helped lead her teams to two College Hockey America league championships and two NCAA tournament appearances.

Coach McNeill currently coaches the Washington Wild 19UA team and coaches with the Seattle Women’s Hockey Club (SWHC). She holds Level 4 USA Hockey and Hockey Canada Coach 2 coaching credentials, and has served as WWFHA's Coaching Director since spring of 2018. After coaching for many years at the Washington State Female Development Camp, she joined the coaching staff at the USA Hockey Multi-District Camp for the Pacific, Rocky Mountain and Northern Plains Districts on Colorado Springs, CO in 2019.

Born in Evesham, England, Coach McNeill has played nationally competitive inline hockey and adult recreational ice hockey out of California and Washington for more than 25 years. Many of the players she has coached have moved on to NCAA D3 and ACHA hockey teams, employment in the NHL, or returned to the Seattle area to help coach local girls' teams.

When not on the ice, Coach McNeill is the Director of Quality Control at IDRI an organization that applies innovative science to develop products to eliminate infectious diseases of global importance. McNeill’s group provides analytical development and quality control services to support drug product formulation development, manufacturing, product release and stability studies. Development and analytical thinking are also key elements for player and team growth.

Coach McNeill strongly believes that critical attributes for the developing female hockey player include more than the traditional on-ice skills involving skates, sticks and pucks. Self-confidence, responsibility, work ethic, communication and sportsmanship are vital qualities for a player to be successful. She is proud to have coached the only two teams in WWFHA's 16 year history to have won the PCAHA midget league Achievement Banner for sportsmanship and fair play.

“If we, as coaching staff, perform our jobs correctly, players will emerge from our programs not only as creative and competitive hockey players, but as strong, pro-active young women with unlimited potential.”

Players who are selected will be contacted by Kathleen McGarrigle , Pacific District Girls'/Women Representative, with more information about the USA hockey Multi-District Camp. Click here for the Pacific District Website.

Please read the FAQ at the bottom of this page.

Welcome to PNAHA's registration process for female players participating in the PNAHA Washington State Female Development Camp. Note: Females must register on this Girls/Women Page. Do NOT use the link on the Youth Development Camp page to register if you are female. PNAHA is required to utilize the Rocky Mountain Register to register players for the PNAHA Development Camps. Rocky Mountain Register is the registration process of choice of USA Hockey. Once you have registered your player in this system your information will remain in the database, and each year that your player is eligible for the PNAHA Camp and/or Pacific District or USA Hockey National Camps you will only need to enter your Login (your email address) and password to register your player and/or players and edit their information if necessary. So, be sure to keep this information so that you can retrieve it for future use.

Please have your Visa or Mastercard available prior to beginning this registration process. After you enter your information you will need to pay for the registration. Note that by beginning this process you are demonstrating your player’s commitment to attend the camp. Registration fee for the PNAHA Washington State Female Development Camp is $135.00. This fee is nonrefundable. There are no exceptions.

Have the following information available before you begin the registration process, as you will be entering your Player’s Profile:

Many of the forms needed for the camp require similar information. This system can automatically fill out the registration forms based on your responses to the Player Profile questions. When you arrive at the Summary Sheet (Example at the bottom of this page) you will be directed to print the “USA Hockey Consent to Treat/Medical Release” form. Be sure to have the player’s legal guardian sign this form, and bring it to the Development Camp with her. Note that under "Contact Information" there is a button that allows you to update your player’s information. If you have two players attending the camp, click the button under the "Player Information" section; billing information is located at the bottom of this page. Your registration is not final until payment has been made and cleared. On this page, you can locate your account number, and you can print out your receipt

When you have gathered the questionnaire information noted above, and have a valid Visa or Mastercard; please begin the registration process by clicking on the "Rocky Mountain Register" button below. The registration process will be complete once you print out your player’s registration forms. The player must bring these forms to check in for the PNAHA Washington State Female Development Camp. 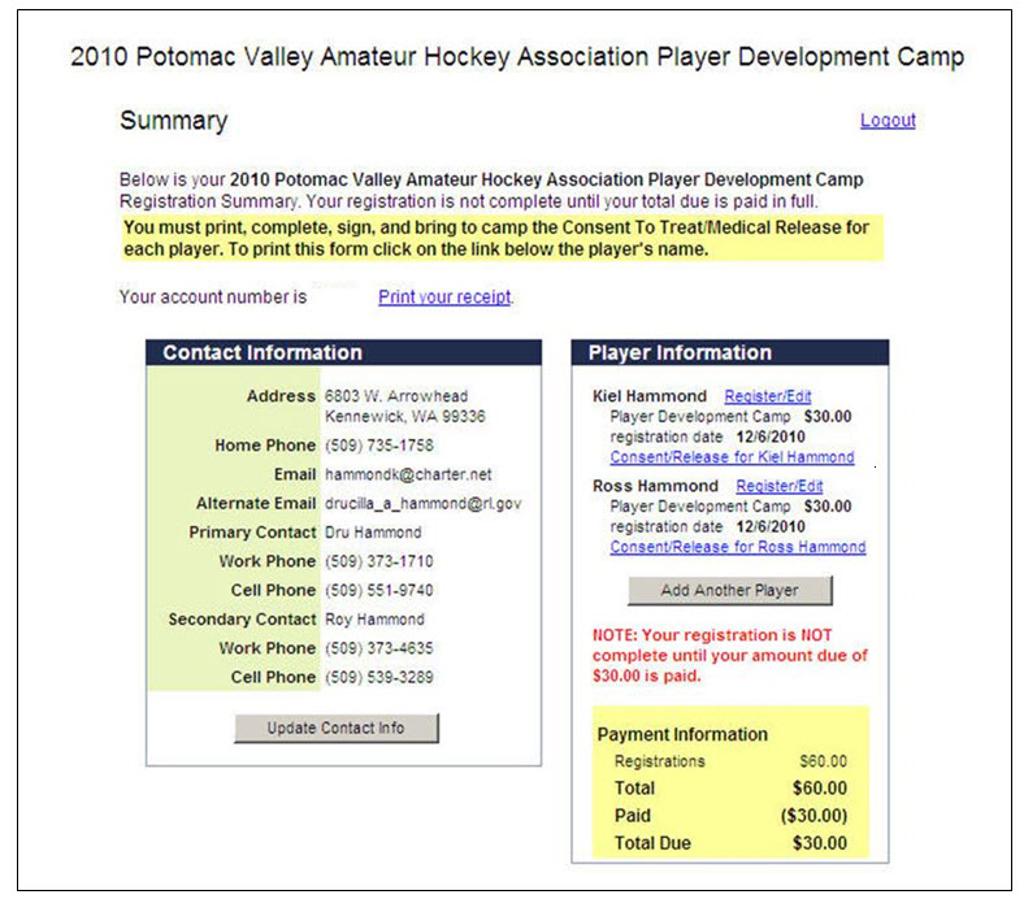 This REGISTRATION link is for Females only - click the image below

What is the PNAHA Washington State Female Development Camp?

Who is the State Camp for?

When and where is the camp?

What else will the State Camp do for me?

How will this help my goal to play collegiate hockey?

How much does it cost? What do I get?

Why is the Pacific District Tryout/Development Camp in Colorado?

If there is no way for a 14U player to go to the National Camp this year, why should I go to the District Camp?

How will I know if I made the Pacific District / Multi-District Tryout/Development Camp in Colorado?

Congratulations to the players who are selected to attend the 2019 USA Hockey Multi-District Female Development Camp.

PNAHA would like to thank Alexis Myers, Kristen Wright and Lindsey Fry, and Kelly Stephenson for selecting this year's Washington State player representatives.

Selected players and alternates are listed in alpha-order.